That was the Climate Camp 2022 at Lobau Camp!

The Climate Camp 2022 has gone into the 7th round! Between 22.05 and 29.05 this year’s camp took place at the Lobaucamp on the outskirts of Vienna in mostly good weather. The decision was made for this location to draw attention to the Lobaucamp and to support it. 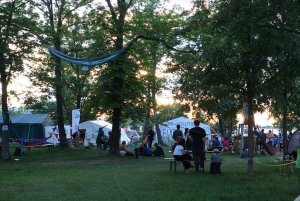 As in previous years, the Climate Camp 2022 was based on the implementation of the four pillars: Alternative Living, Networking, Direct Action and Education, which were reflected in the individual workshops and summer Schools. 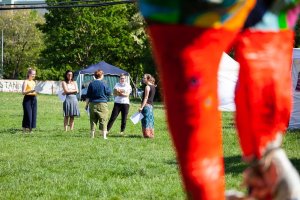 The range of workshops and summer schools spanned from Learning from #LobauBleibt, Organizing for Future, Giving-economy (Schenkökonomie) – theory and practice, Preparing climate justice in the media and FLINTA* Empowerment to Connecting fights: Italian experiences of radical activism and Boys do cry – a step towards abolishing patriarchy.

The evening program was as varied as the workshops and summer schools. Pub quizzes, movie nights and bands like Liquid Air, Clitzer and Wirrbel accompanied the climate camp until late at night. Friday evening Stories from the Lobaucamp were told and experiences were shared, which again underlined the importance of this protest action.

A climate camp without direct action is unthinkable – that’s why there was the big demonstration to the SPÖ party conference on Saturday, May 28. The stop of the city highway and thus the Lobautunnel was demanded. The demonstration started around 12:00 at Schwedenplatz, the route ended with speeches and music three hours later on Praterstraße. 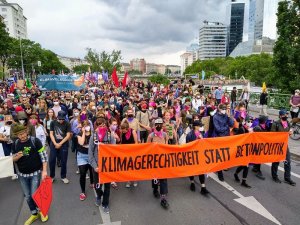 To live alternatives means to create a common togetherness according to the visions of a climate-just world. The mutual appreciation as well as the attention to each other belong to such a togetherness. Therefore, the Climate Camp would like to thank everyone who supported us: workshop leaders, helping hands, translators, child care workers, bands, the Lobbaucamp and of course all participants!

It was only because of your participation that we were able to organize and realize a wonderful week full of exchange, actions, and coming together.

Even though this year’s climate camp flew by: After the camp is before the camp and our work continues! But even though we work as a team for free, a climate camp costs money. If you want to support us, please donate!

You want to help organize the next climate camp near Vienna? Then send us an email to mitmachen@klimacamp.at.