From 23 to 30 May 2021, the 6th Climate Camp took place near or in Vienna.  While at the Danube Canal at the ClimatePROTESTcamp people camped and protested for climate justice throughout the week (opening speech), numerous workshops and Summer Schools took place offline at different locations in Vienna . Due to the COVID-19 pandemic, some workshops were also held online. But actually everything was planned differently: The climate camp should have taken place at the Zukunftshof, but for the first time the police did not recognize the climate camp as a political gathering! We will describe later how this will proceed and what (legal) steps we will take.

Due to this decision of the police, we had to reschedule in a very short time. This made the preparation more difficult, but the climate camp could still be realized. An overwhelmed homepage, several negative COVID-19 tests, overfilled compost toilets, lots of delicious food, concerts in the sunset, numerous campplena and a successful direct action were part of an equally successful Climate Camp 2021. 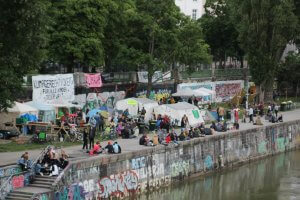 Despite the COVID-19 pandemic, we also tried this year to implement the four pillars of living alternatives, networking, direct action and education in our work and at camp. Whether on female rage, animal liberation, Just Transition in the airplane industry, mindful activism, or the gift economy; the workshop program was as diverse as ever. In addition to the workshops, which lasted between one and a half and three hours, several Summer Schools were held by different speakers. The Summer Schools offered the opportunity to work intensively on a topic with a fixed group over several half-days. From action climbing to anti-racism and filming as political work to animal-friendly chicken farming; the Summer Schools covered just as many topics and were thus also part of the Education pillar. Participants of the Summer Schools presented the experiences they had gathered over the week at the end of the camp. You can watch a  first video of this here.

Although the COVID-19 pandemic made larger gatherings difficult, the networking pillar was also part of Climate Camp 2021. In The Role of Degrowth for Enviornmental Actors in Vienna: A Panel Discussion at Kunsttankstelle Ottakring, several actors (Extinction Rebellion, Fridays for Future, KlimAttac, System Change not Climate Change! and the Klimavolksbegehren) talked about the necessity of degrowth and how to deal with economic constraints in their own political work. At the Summer School How anti-racist is your environmental awareness practice?, speakers organized online exchange spaces with activists leading political struggles in Namibia, Germany, Chile, or Mexico. Meanwhile, several struggles also came together at the ClimatePROTESTcamp. At the camp, the Sezonieri Campaign raised awareness about the rights of harvest workers in Austria, and the Colombian Diaspora in Austria educated about the violent repression of the neoliberal regime under Iván Duque. 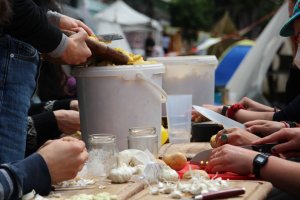 At the same time, the ClimatePROTESTcamp offered space to try out and live out alternatives. While Robin Foods conjured up delicious dishes from discarded food and was supported by numerous helping hands in cooking, next door at Murat’s people could repair their bicycles. The ClimatePROTESTcamp at the Danube Canal was also the most publicly accessible climate camp in and near Vienna so far. Along with this came everyday conflicts that the care and awareness team worked on, showing that conflicts can be resolved without state violence.

No climate camp without direct action! On May 28, System Change not Climate Change! carried out an action of civil disobedience as part of the climate camp. The activists drew attention with banners and a blockade against the planned Lobau highway and its feeder roads. In the midst of the climate crisis, they demanded an end to these fossil fuel projects. Because traffic remains in Austria the climate killer No.1. A climate just mobility turn is urgently necessary in Austria! 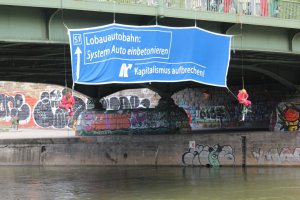 While activists from System Change not Climate Change! blocked the Aspern Bridge and turned the Danube Canal into a symbolic highway, a demonstration with Fridays for Future, Extinction Rebellion, Platz für Wien, Lobau bleibt!, Hirschstetten-retten and many more marched through downtown Vienna. The demonstration stopped at those fossil actors (City of Vienna, SP Vienna, Federation of Austrian Industries, ASFINAG, etc.) who are involved in the construction of the Lobau highway or want to profit from it. The action and the demonstration against the Lobau freeway are only one part of many to come. Because:
Lobau remains! Lobau remains! Lobau, Lobau, Lobau; remains, remains, remains!

So the Climate Camp 2021 is over, but our work continues. Because actually the climate camp should have taken place at the beautiful Zukunftshof in Rothneusiedl. We had already started with the construction and preparations. But for the first time in the history of the climate camp  the Landespolizeidirektion Wien (regional police headquarters Vienna) did not recognize the climate camp as a political assembly! We do not accept the decision of the LPD Wien and therefore we’ll appeal against this decision! So that camping remains a form of protest, so that climate justice in Austria is (finally) understood as a political concern, so that we can set a precedent, so that in 2022 the next climate camp can be realized!

You want to help organize the next climate camp near Vienna? Then send us an email to mitmachen@klimacamp.at.